No response from the Bolt IoT team after last conversation

Back in May I had purchased a Web Development program which contained a Training + Assured Internship package along with it. After completing the training, I was given a set of tasks to complete for the live internship offered by bolt. I completed those tasks as stated and submitted my project to support@boltiot.com. I had also put in a request to mention a 2 month duration from May to July in my certification, to which Mr. Ravi Ujjwal asked me proof of this rule. I submitted the proof, to which Mr. Ashwin Salgaocar replied that

This was acceptable by me as long as the combined certificate mentioned 2 months of training followed by 6 weeks of internship. Around 2 weeks, I sent a mail requesting the update of my project and mentioning the dates May to July in the certification, and there was no reply. I waited for a few more days then sent a follow-up and still there was no reply.

Yesterday, I again wrote a mail asking the same, and stating since my college is due to open in a few days, I would require to show my proof of work. I also wrote that last 2 mails have been completely ignored and I would really appreciate a response. Since then there has been no response as such.

I really don’t know where else to go next, hence I came here. Hope I can get some response in this forum.

My only request in additional to this would be to please mention the specific dates of the Training and Internship:

For Training: I completed it on May 25th so considering that the 2 month program also includes 6 weeks internship that leaves 2 weeks for training hence the dates: May 11th to May 25th.

For Internship: Since I submitted on July 7th, a duration of 6 weeks would imply May 26th to July 7th

Hope this isn’t much to ask. Just stating facts here. Since my College requires exact duration with dates as proof I would really appreciate stating the same on my both training and internship certification.
Appreciate your time. Thank You!

Hi @somadisingh13,
Apologies for the inconvenience caused. I have taken this to the team and we’ll get back to you shortly.

Hi @somadisingh13 ,
Have you emailed us any proof from your college that the aforementioned changes are required?

Hey Raghav,
I have mailed your team the proof. I’ll attach the mail asking for the same and my reply below.!
Mail to HOD 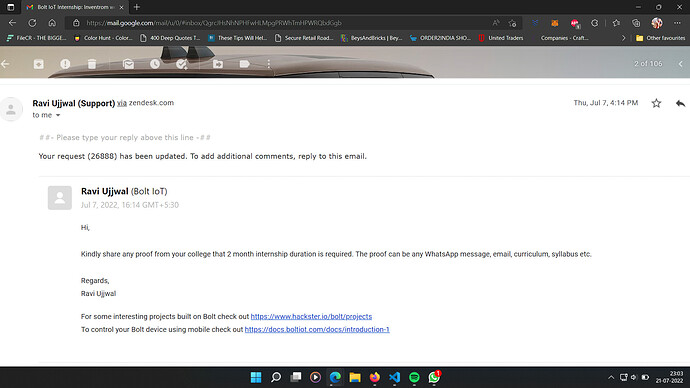 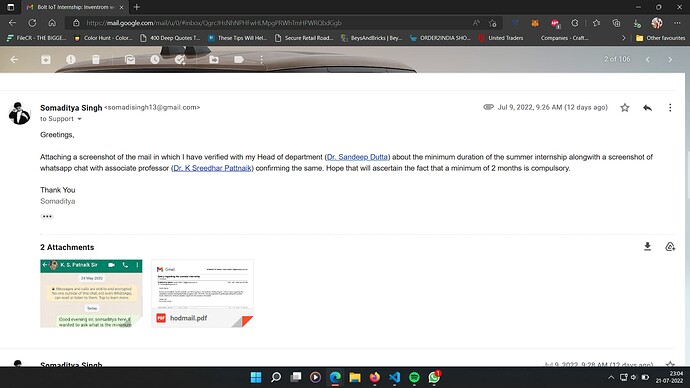 @somadisingh13 I believe you must have already received the certificate by now. Let me know if it is good to go.